(Ecofin Agency) – According to the Ethiopian Investment Commission, Ethiopia has attracted $ 2.2 billion in foreign direct investment (FDI) in the first half of the current fiscal year (July – June). The information was given on Tuesday by the… Read more › 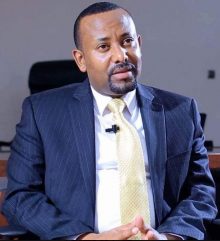 The future Ethiopian Prime Minister must give high priority to the fight against the deep human rights crisis in the country, said Amnesty International after the election of Abiy Ahmed as head of the Ethiopian People’s Revolutionary Democratic Front (EPRDF),… Read more ›

Mozart and Orff for the Kaiserhaus

Asfa-Wossen Asserate is great-grandson of an empress and grandnephew of the Ethiopian Emperor Haile Selassie. Once a Tölz music teacher familiarized him with Mozart’s music. The Frankfurt Prince never forgot that. A special Easter story. Bad Tölz – A year… Read more ›