Characteristic of Ethiopia is the ubiquity of the cross symbol. Not without reason is the Feast of the Cross (“Meskel”), which commemorates the Christianization of Ethiopia, one of the highest in the Ethiopian Orthodox Church and one of the most important holidays in Ethiopia.

The history of the cross in Ethiopia goes back to the 4th century AD. Ethiopia had adopted the Christian faith during this time and used the symbol of the cross as one of the first kingdoms of the world on coins. From generation to generation, ever more varieties and forms of crosses have developed in Ethiopia. Even traditional clothing is often decorated with crosses. In addition, believers can sometimes even today tattoo a cross on their forehead or chest. Differences are mainly Vortagekreuze, hand crosses, neck and trailer crosses and roof crosses.

processional crosses
Processional crosses accompany every procession of the Ethiopian Orthodox Church. They have a hollow shaft with which they are put on a wooden stick. At processions and religious ceremonies, they can be carried so over the heads of the crowd.

hand crosses
Each Ethiopian priest also has a hand cross. He always carries this with him. If he meets believers, he puts it on his forehead and the faithful then kiss the cross. A custom that can be experienced even on the streets in the modern city of Addis Ababa. 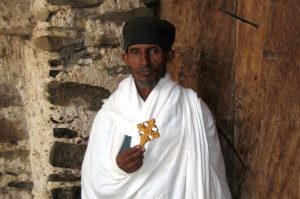 Pendants crosses
The crosses are worn with a string (mateb), which is wrapped around the neck of the new Christians at the time of baptism and since the Christianization of Ethiopia in the 4th century is considered a symbol of faith. Like all other types of crosses, they are made of different materials and shapes that are often assigned to individual regions.

roof crosses
Worth seeing are the often impressive roof crosses, which are located on the generally round roofs of Ethiopian churches. Often ostrich eggs can be seen at the ends. These are supposed to be the sins of the faithful who have not been confessed to the priest. 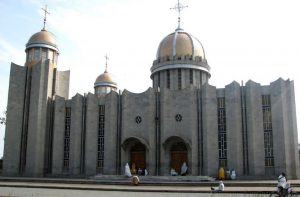