A visit to Africa somehow gets the dimensions of our lives right. Of course, this also applies to Ethiopia – all the more so because the scientists assume that our ancestors became human beings in this country. “Lucy,” they baptized the creature that was said to have crossed the highlands 3.18 million years ago. The 47 bones found by this Australopithecus afarensis are one of the main attractions of the National Museum in Addis Ababa , which otherwise displays an adventurous collection of historical, folklore and religious exhibits.

Like the museum itself, the city presents itself: modern office and hotel buildings mix with simple houses and mud huts, with lots of corrugated iron in between. The Trinity Church, which our guide Sammy praises as an attraction, is also characterized by this mixture of old and new and therefore unspectacular for European conditions. It was built in 1941, and is the resting place of Haile Selassie, the last emperor of Abyssinia (ancient name of Ethiopia ); he claimed to be the 225th descendant of the Queen of Sheba and therefore called himself “Lion of Judah”.

The legendary queen, called Makeda, was said to have founded Axum and paid a visit to the biblical King Solomon. According to legend, the result of this visit was Menelik I, who is considered the ancestor of the Ethiopian ruling dynasty and who later brought the Ark of the Jews to Ethiopia . So far the myths. The fact is that in Axum a ark of the covenant (not accessible to visitors) is kept. 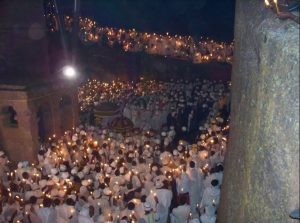 Ethiopians are a very religious people. They were one of the first Christian states (since the 4th century) and follow their own form of the Orthodox rite; Jewish-Christian myths play an important role. The rock churches of Lalibela, for example, were built as the second Jerusalem from the 11th to the 13th century, or carved into the rock. One of these churches is also referred to as the tomb of Adam.

A visit to the churches makes you immerse yourself in this world of myths and legends: over trodden-out steps, beaten raw into the reddish rocks, through narrow passages and gorges you approach the churches. Inside, they are very narrow, only a few believers find space, but in front of the church is prayed, sung and danced. The magic of the place can not destroy the roof structures, which were set up without regard to blight for the protection of the churches.

Particularly impressive is Bete Kiddus Georgis, the church of St. George. On the way there you only see a huge cross, which seems to be in the middle of the rocks. If you come closer, you look into a canyon about twelve meters deep, in the middle of the bulky construction rises. The interior of the church is simple with only a few ornaments and the more typical saint icons of recent date.

The church in the Ura Kidane Mihret monastery presents itself quite differently. We take a boat from the town of Bahir Dar to the peninsula Zeghie in Lake Tana . From the pier we walk through a coffee plantation to the monastery, which was founded in the 14th century. Through a narrow gate we enter the monastery area, which is populated by hundreds of people. They celebrate the festival Kidane Miheret, which commemorates the Covenant of Mercy between Jesus and Mary. Surrounded by several buildings stands in the middle of the rotunda of the church. Inside there is a walkway where, on the walls of the Holy of Holies, hundreds of saints and angels in bright colors look down on the viewer with their typical big eyes.

The celebration also takes place here in front of the church. The believers with their prayer sticks (see page 1) gather around the priests and accompany the liturgical chants with drumming and dancing.

However, life in Ethiopia is not just about religion. North of Lake Tana lies the town of Gonder, where the remains of the former worldly prosperity can be visited. In the 17th and 18th centuries Gonder was the capital of the empire. The palace complex, the Gemp, was called the “Camelot of Africa”; today only the ruins are to be visited. Well preserved are the baths of the Fassilades (17th century) and the church Debre Berhan Selassie (16th century, rebuilt in the 19th century). 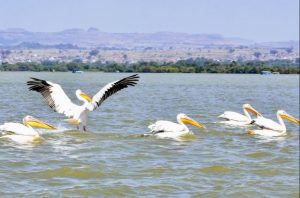 In the streets there is a lively, happy atmosphere, poverty is omnipresent, but the streets and shops are still tidy. Traded is also with things (eg plastic), which would land with us in the garbage. If you want to experience the hustle and bustle of the city, you should treat yourself to the Mercato in Addis Ababa, one of the largest markets in Africa

Of course, the 21st century has also arrived in Ethiopia : Especially in the cities, people are busy with their cell phones. The intrusiveness of beggars and dealers is limited, only the hygienic conditions are getting used to away from the tourist hotels.

Anyone who watches people doing their coffee (or beer) will find it hard to relax – too much to see and take pictures of. Especially many beautiful and interesting people. Here you can learn why the icons have such big eyes.