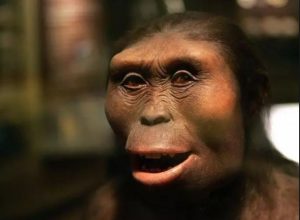 Did God create man or did we descend from the monkey? For some Africans, belief and evolutionary theory are incompatible. This also shows outraged reactions to a DW contribution. What are theologians like? In 25 portraits she is to make African history tangible for young Africans – online and in DW radio broadcasts. The focus of the first episode was Lucy, also called Dinknesh. American researchers found the skeleton in 1974 in Ethiopia. According to her estimates, Lucy is about 3.2 million years old – and for those who believe in the theory of evolution, an early ancestor of people living today.
Friedrich Stenger knows the debate about the theory of evolution well. The Catholic priest has lived in Africa for decades, most recently at the Catholic Tangaza College in Kenya’s capital, Nairobi. “Once a biology teacher in Ethiopia told me that he has major conflicts with the Orthodox Church, because the pastor says on Sundays that the world was created 4000 years ago,” Stenger says in a DW interview. “The teacher said: As a scientist, I know that can not be true, how can I bring science and religion together?”

The Catholic Church was so hard for a long time. It was not until the 1950s that it slowly began to open up to the theory of evolution. In 1986, Pope John Paul II affirmed that evolution and faith need not be mutually exclusive. His successors share this position. Theologians see it this way: The account of the creation of the world in seven days, as it is described right at the beginning of the Bible, need not be taken literally. 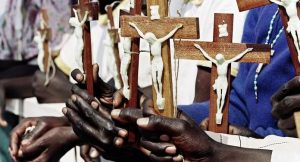 “What the creation story wants to tell us is that God is at the beginning of creation,” says Africa missionary Stenger. “How this is to be understood in detail is what science has to tell us, which is why the theory of evolution is very important.”

However, this position is far from shared by all Christian churches. Many of Africa’s popular free churches and ‘African churches’, which combine Christianity and traditional African rites, are sometimes hostile to evolutionary theory, Stenger says.
Abdulkader Tayoub has also thought a lot about how faith and evolution can be reconciled. “Many Muslims believe that God creates everything through his will, and that man is, so to speak, the pinnacle of creation,” says the professor of Islamic studies at the University of Cape Town in a DW interview. “Some people believe that the theory of evolution limits this role of God.”

Individual Islamic scholars have already commented on these issues, but a true debate on how to unite faith and evolution does not exist in the Islamic world, says Tayoub.
But apart from the religious dimension, he sees another reason why many African people reject the evolution: “Many people feel that these theories do not belong to them, that they come from outside Africa, and that they are involved in their development at all can not participate. “