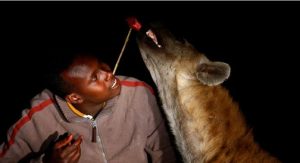 Hyenas are dangerous predators that scare people. In the holy city of Harar in Ethiopia live hyenas and humans close to each other in peace.Abbas Yusuf feeds a hyena behind the walls of the city of Harar. The 23-year-old is known as one of the “hyena men”. Harar is located 1800 meters high in eastern Ethiopia on a fertile plateau surrounded by a desert. Here live human, animal and predator close to each other. For almost half a millennium, the old town of Harar is surrounded by a fortress wall. It was declared a UNESCO World Heritage Site in 2006. With its 82 mosques, the old city of Harar is one of the most important sanctuaries for Ethiopian Muslims.Here, the feeding of wild animals has been maintained since ancient times – even the hyenas. Hyenas are not exactly the favorite animals of humans. They are described as vicious and cowardly. 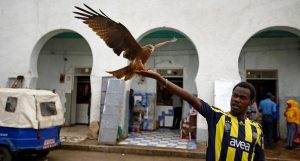 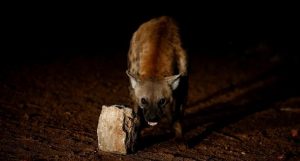 The spotted hyenas raise livestock and even humans. In Harar, they try to tame them. Abbas Yusuf feeds her with meat waste every night. He is not afraid of them. He feeds her and plays with them. The meat waste collects Abbas during the day from the slaughterhouse within the city walls. Feeding the hyenas is one of the traditional traditions in Harar. They perform their services as garbage disposal. Some people believe that the hyenas even eat jinn, so ghosts.