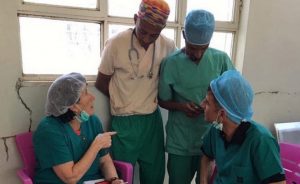 A surgeon explains that some cases “were so bad that if we had not operated …. at least half of them would be dead in a year”

JTA – As part of a week-long medical mission to Ethiopia, Israeli doctors performed surgeries to correct severe deformities in the spine.

Eight doctors, two nurses and a physiotherapist from the Hadassah Medical Center in Jerusalem went on a mission last week in the northern city of Mekelle.
According to Dr. Josh Schroeder, spinal surgeon in Hadassah, who led the mission with Dr. Allon Moses, president of Hadassah’s Department of Clinical Microbiology and Infectious Diseases, the Israeli medical team performed five surgeries at the clinic. Ayder Comprehensive Specialized Hospital, which treats about 8 million patients but does not have a spinal surgeon.

Patients, all aged 18 and under, had severe spinal malformations that caused life-threatening complications, including pressure on internal organs and lung infections, Schroeder told JTA. Monday. The surgical procedures were complex, some lasting eight hours.

“The problem with pediatric cases is that if you do not treat them on time, they get worse,” he says, “and these cases were so bad that if we had not operated on these children, at least half of them would be dead by next year. ”

Mr. Schroeder was pleased to have coordinated and participated in the mission.

“We work in a truly privileged society, both in Israel and the United States, and the things we have at our fingertips do not exist there,” he said. “These people, you can really change their lives with a relatively short intervention. ”

Hadassah and Ayder Hospitals have a partnership that dates back five years, with Israeli medical students doing duty in Mekelle, and Ayder’s doctors receiving training and supplies from Hadassah.